The Hunt for Fosterville-Style Gold Mineralization Down Under

Shares of Kirkland Lake soared thousands of percent with one rediscovered Victorian gold mine.

E79 Resources (CSE: ESNR) – currently trading below C$1.00 per share – is advancing the Beaufort and Myrtleford Gold Projects in one of the hottest gold area plays on the planet — the Victorian goldfields of Victoria, Australia.

The company is targeting Fosterville-style mineralization on both of its projects.

The Fosterville Mine is also one of the world’s highest-grade gold mines at an almost unheard of 17.9 grams per tonne gold.

Shares of Kirkland Lake have gone up thousands of percent as a result — rising from below C$1.00 to over C$72.00 and going on to list on the New York Stock Exchange.

E79 Resources is exploring two projects with similar attributes, yet the stock still trades below C$1.00.

E79’s flagship is the 100%-owned (subject to 1% NSR) Beaufort gold project in Victoria. It has produced 1.16 million ounces from alluvial sources in the past with no hard rock source identified.

The project is nearly 30,000 acres. And the company’s geologic team is seeing a classic gold arsenic antimony geochemical signature similar to Fosterville.

The project has been through numerous owners, including Rio Tinto and BHP. But all previous owners were looking at the project in the context of a shallow open pit. So no systematic exploration or drilling has been carried out at Beaufort targeting Fosterville-style gold despite the observance of similar structures at depth.

The plan is to conduct geochemical sampling and mapping to define the target along the Navarre Fault ahead of reverse circulation drilling in Q1 and diamond drilling in Q2 2021. 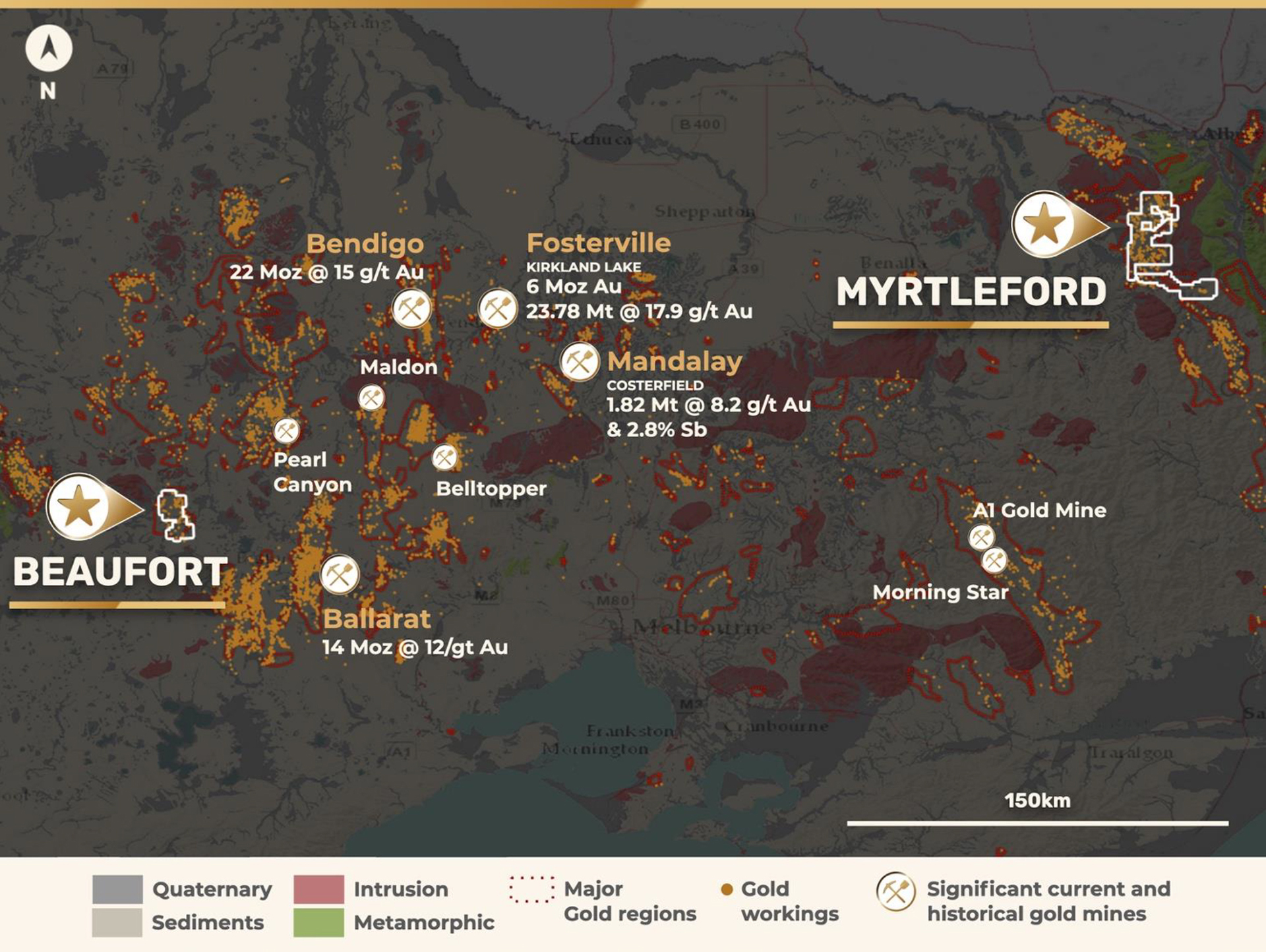 E79 also 100% owns (subject to 1% NSR) the Myrtleford gold project in Victoria. It’s a giant at 100,000 acres. It has produced more than five (5) million ounces of gold from alluvial sources and the permit hosts over 70 past-producing high-grade underground gold mines — man with grades higher than Fosterville’s reserve grade of 31 grams per tonne gold. 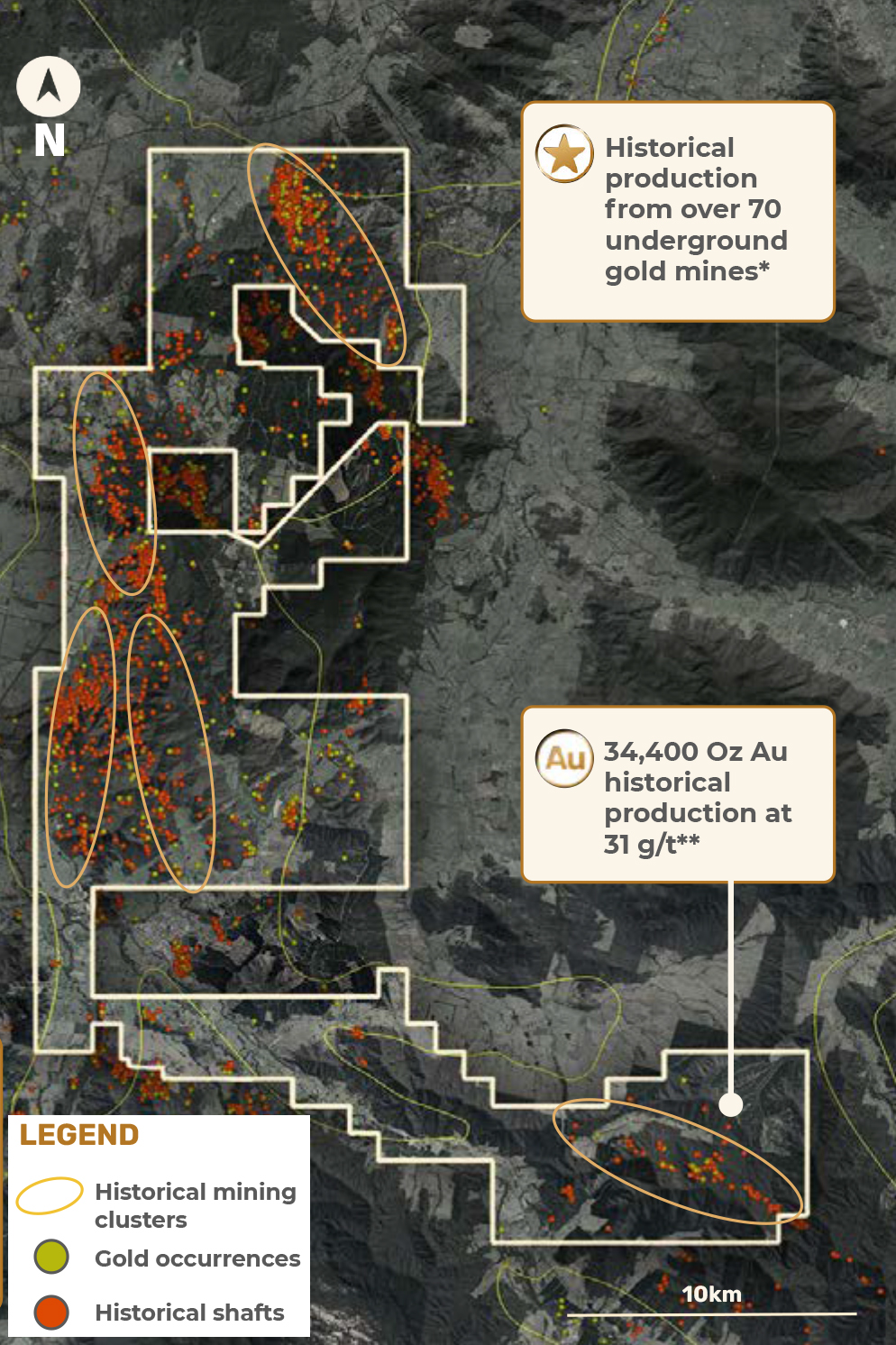 The independent small mines that exist on the property could never access the capital to explore below the water table. As such, there are multiple shear-hosted veins accessible by adits where mineralization appears to be open at depth. These will be the near-term targets for testing for high-grade extensions.

Both of E79’s projects have had substantial historical gold production from relatively shallow depths — yet, importantly, neither property has been significantly drill-tested at-depth.

Thus, deeper exploratory drilling will be a key area of focus in 2021 as the company builds toward producing a maiden resource for both the Beaufort and Myrtleford projects.

E79 represents a true early-stage opportunity in the junior gold space where the drills will tell the story.

The company is operating in an area that hosts some of the largest and highest-grade gold mines in the world… so to say the company is in the right mining address would be an understatement indeed.

Running E79 Resources is CEO Rory Quinn — who you’ll be hearing from in a second. Rory is the former Director of Investor Relations at Wheaton Precious Metals, where he worked on acquisitions totalling US$6 billion and was involved in reviewing hundreds of mining companies and assets.

Dennis Arne and Peter De Vries make up the technical team. They have a combined 75 years of geology experience, much of it in Victoria. Dennis is a PHD/PGEO and has published an extensive amount of work on the geology and mineralogy of the central Victorian goldfields of Australia. Peter is an exploration manager who’s spent half his career focusing on Victorian gold assets.

Gerardo Del Real: This is Gerardo Del Real with Resource Stock Digest. Joining me today is the president & CEO of E79 Resources — Mr. Rory Quinn. Rory, how are you today?

Rory Quinn: Very good. Thank you, Gerardo. How about yourself?

GDR: I'm excited to have you on. The company, E79, checks all of the boxes as far as keywords go anyway. It's gold; it's a large 100%-owned portfolio in the Victorian goldfields. It's a good market cap. It's a small market cap. It's a great share structure and a good team with experience in this part of the world.

And so I'm excited to have you on and introduce the story to the audience. But I want to dig into the merits of the properties and the team and the background and why you think 2021 is going to be a good year for the company. And, obviously, we all know how we feel about the gold space, right?

So with that being said, can you give us a brief overview of E79 and the team in place? And then we can talk about the Victorian goldfields, which, of course, is one of the hottest gold addresses on the planet, right?

RQ: Yeah, and to continue with what you were saying, I would use three words: Fosterville-type mineralization. That's what we're looking for at our Beaufort property, which is probably the more advanced of the two. Coincidented structure relative to Fosterville and almost an identical geochemical signature.

GDR: Tell me about the team that's going to be exploring for Fosterville-like deposits because that's critical in this part of the world, right? You have to know what you're looking for. You have to recognize the structures, the rock types, and you can't be a geologist or have a team that isn't experienced in this part of the world and hope that you get lucky, right?

RQ: That's right. We're really lucky to have a very solid team in Victoria itself led by Dennis Arne who’s a superb geologist and really specializes on the geochemical side. He's actually Canadian but has been living in Victoria for several years now. And his partner, Pete De Vries, is a native Victorian who’s been working in the Goldfields for really most of his career.


So that really benefits us from the standpoint of community relations but also really advancing the geological program, exploration program, with people that really understand the rocks down there. And we also have a director based out of Brisbane at our regional office there… so very well set up from the point of view of having folks on the ground in Australia.

GDR: We talked a bit off air about the quiet period that most companies come into with the holidays approaching… and you joked that it's no letting up for you and the team.

Can you walk me through the flagship and then the exciting 2021 that you have in store because I understand you have a pretty aggressive exploration program that everybody should expect.

RQ: You know, we do. So we've just closed our C$6 million financing that was at C$0.45. We're currently trading at about C$0.73, C$0.75. So now that money is in the bank. We're busy hiring… getting all of the folks we need to advance our exploration program.

We'll be hoping to announce a drilling contract to begin the year. We'll talk to the market a little bit about our soil program, our targeting, so that we can then follow up with an exploration/diamond drilling program at Beaufort itself.

Beaufort is probably the most advanced of the two properties. Beaufort really demonstrates the Beaufort-type mineralization… almost that classic gold arsenic antimony geochemical signature that we see up at Fosterville. And the signature at Beaufort is almost identical.

At Myrtleford, the opportunity there is… we've consolidated an entire historic gold mining camp which has never been explored in anything like a holistic or systematic way. And what happened there… that was advanced before by either individuals, old timers, or small syndicates.

And what they would do is they would follow these high-grade quartz reefs, these quartz veins, down to depth, but would stop at the water table. The vast majority of the time exploration stopped at the water table just due to a lack of capital… lack of pumping capacity. So what we'll be able to do is bring capital to bear to make sure that we can get down and explore beneath the water table.

GDR: Excellent. Now walk me through how you were able to put together this pretty extensive land package. The way that I understand it is, frankly, you and the team used the bear market to perfection, right? You rolled all of this in. If I have the story correct, 2016, 2017-ish?

RQ: Yeah. Thanks for the question. That's really key to understand because we do… I mean it's probably the hottest gold exploration play in the world right now. And there's currently a land grab there in Victorian goldfields.

But this land package was not put together in the context of this current area play we're seeing now since the emergence of Fosterville South and the incredible job they've done that's creating shareholder value. This land package was put together in the context of 2016, 2017, when the Fosterville Mine itself was being proved up by Kirkland Lake. And when they were exploring the down plunge into the Swan zone and really showing that to be the world-class ore body that it is.

Our group was familiar with Beaufort, actually, since the ‘90s. The vendor, and one of the partners, Martin Pawlitschek; he used to work for BHP. And BHP were on the property in the ‘90s when they were in gold. They've since exited gold. But he was familiar with that property back then. And when it became available in 2016… he worked to pick it up.

GDR: Let's talk share structure, which, of course, is critical. I know the market cap is, what, approximately C$30 million give or take a few million… is that accurate?

GDR: And obviously success is going to lead to a re-rating, right? If the drill bit is kind and mother nature yields what you want, if you look at your peers… I mean, those market caps are triple-digits and four-digits; not double digits, right?

RQ: Exactly. I mean, I think we're at an attractive valuation here. I think current shareholders aren't willing to sell at these prices. So look, I think we need to get out into the field and advance our exploration program.

We'll look to be very newsy in the new year. I think us advancing the exploration there… getting the drilling contracts, getting the targeting done, getting the drills on the ground, and being able to advance that in Q1, all happening in Q1… I think that's going to start the news flow, the catalyst flow, and I think we'll see a nice uptick.

GDR: Sounds like an exciting year. I'm looking forward to having you back on as all of that develops. Is there anything else that you'd like to add, Rory? I want to thank you for coming on. I appreciate it.

RQ: No, that's great, Gerardo. Thank you for having me. Just keep watching us. Look for E79 Resources (CSE: ESNR) in the New Year.

RQ: All the best.